Sulawesi has 7 different macaque species on the island, each occupying rather small ranges that interlock like a jigsaw. Why there is little direct competition for food or territotial disputes is a mystery, and perhaps we humans have something to learn from them about peaceful co-existence with other cultures? 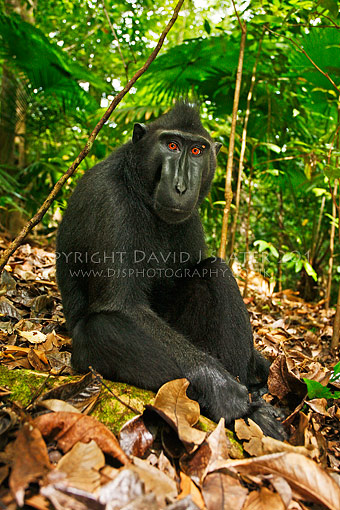 An amazingly photogenic species of monkey confined to the volcanic dry tropical forest in the far north of Sulawesi.
They are more amazing due to their very human-like characteristics, not least their "punk" hairdo, but they are also very inquisitive and clever. But their piercing red eyes seal the fascination for me; Mesmerising yet un-nerving when they make eye contact with you - a memory of our ancient ancestors? 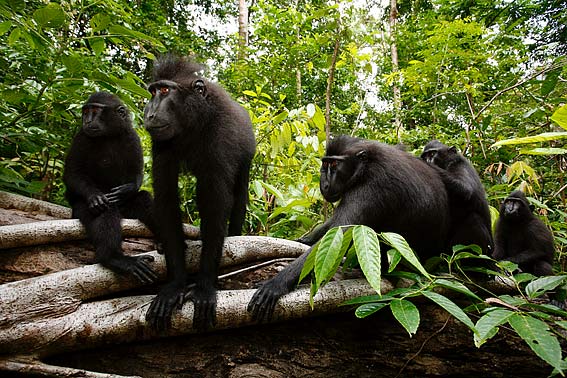 They are critically endangered thanks mainly to us humans - from forest clearance for houses and farms, persecution for their habit of crop raiding, and poaching for bushmeat. Indeed, they can still be found as bushmeat at local markets. A once shuned meat source due to Muslim perspectives, but with the rise of Catholicism on the island, the meat as once again become profit making. Below is a pic of a potentially doomed close relative, a male Booted Macaque (I didn't get a trapped crested macaque thankfully!). I say potentially because I got him released for a 20 pence packet of cigarettes as a bribe. The value on these monkeys lives is astonishingly low... 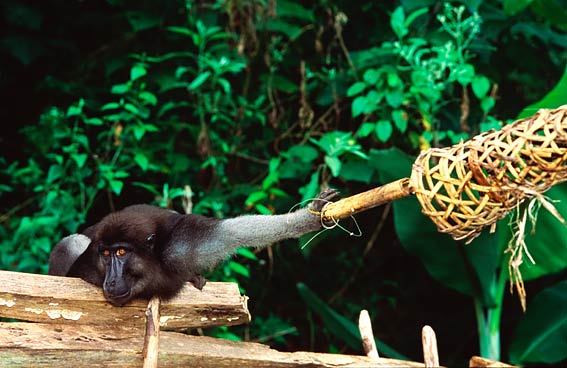 They are very gregarious just like us humans, devoting a large part of their time to play, sitting about and general socialising, but they also spend a lot of time on the forest floor moving between fruiting trees such as fig or the notoriously smelly Durian or Jack Fruit tre (below)..they also need to feed like us, albeit in a diminishing space taken over by us..... 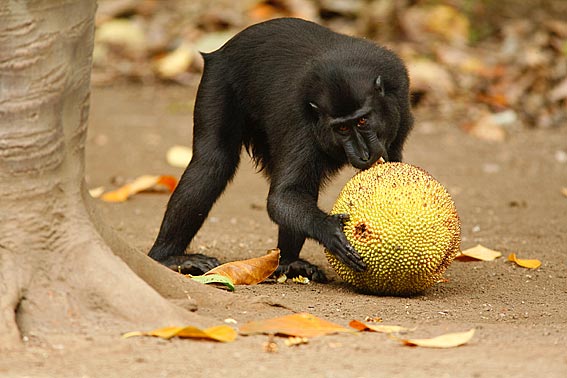 Despite their generally placid nature disputes sometimes break out but are short lived. And despite them having formidable large canine teeth as weapons, they prefer to use their hands to reprimand their relatives. 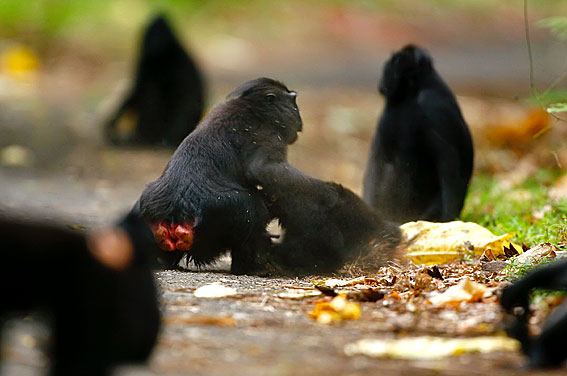 In my effort to get some good photos I decided to try and shadow a troup for three days, moving with them until exhausted enough to return to my basic accommodation nearby. Each day I would be off shortly after dawn trying to relocate them, which I did with the help of a local guide who I had been told was the man who had worked with the macaques the longest. Human contact with wildlife so often ends in misery, but not this time. I love wildlife and want to do all I can to coexist peacefully with them. I must have connected with them a message of unconditional love and understanding..... 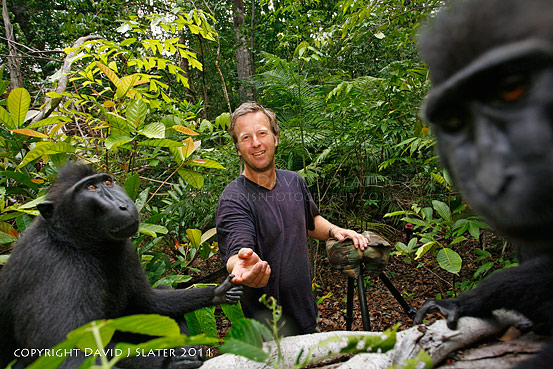 It was about midday on the second day and the monkeys, about 25 strong of all ages, halted for a rest and a grooming session. It had been a hard day as usual, slashing through tangled and very humid jungle, climbing over and squating under fallen trees, all with a 20kg backpack on full of expensive camera gear. I sat close by them, camera at the ready as always. I must have tuned in to them, because after some time a few brave monkeys began to come closer, and slowly but surely began paying me more attention. I held out my hand and WOW, one held my hand back. Shock! This went on for maybe 15 minutes. They started to groom me, picking through my hair as I knelt on the ground, hunched over my camera, but desperate to record it all. I knew about monkey etiquette from many previous encounters around the world, and this made that knowledge so much more than worthwhile.

I decided to set up the camera on a beanbag on a log, self-timer all set. I was afraid they would run off of course, but they didn't. Rather, they grabbed my camera! Quick thinking had my guide rushing to save it - lesson learnt. Setting up the camera again, some of the cheekier monkeys had now got bored, and now even my guide had wandered off for a smoke. I was alone and had to encourage the monkeys back to me for my intended contact experience photo. Soon enough, I was jokingly asking for his help again as the monkeys looked increasingly cheeky as they touched the camera with that glint in their piercing red eyes. It was now that I heard some frames reeled off when my guide struggled to keep the camera from little monkey fingers - the scene was set.

I wanted to keep my new found friends happy and with me. I now wanted to get right in their faces with a wide angle lens, but that was proving too difficult as they were nervous of something - I couldn't tell what. So I put my camera on a tripod with a very wide angle lens, settings configured such as predictive autofocus, motorwind, even a flashgun, to give me a chance of a facial close up if they were to approach again for a play. I duly moved away and bingo, they moved in, fingering the toy, pressing the buttons and fingering the lens. I was then to witness one of the funniest things ever as they grinned, grimaced and bared teeth at themselves in the reflection of the large glassy lens. Was this what they where afraid of earlier? Perhaps also the sight of the shutter planes moving within the lens also amused or scared them? They played with the camera until of course some images were inevitably taken! I had one hand on the tripod when this was going on, but I was being prodded and poked by would be groomers and a few playful juveniles who nibbled at my arms. Eventually the dominant male at times became over excited and eventually gave me a whack with his hand as he bounced off my back. I new then that I had to leave before I possibly got him too upset. The whole experiance lasted about 30 minutes.

It was like the joy of seeing your new baby learn about something new and becoming enlightened with a new toy. They loved the shutter noise, but most of all they loved their own faces, "chimping" away in what seemd to me to be total fun for them........ 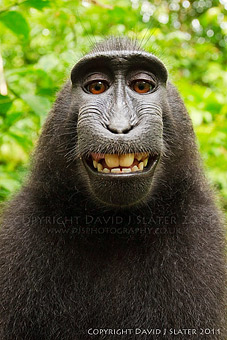 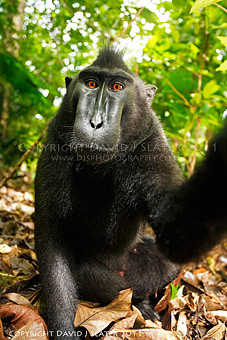 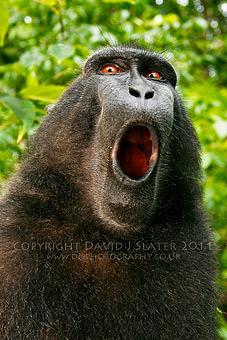 All strictly Â©Wildlife Personalities/David Slater (these are not public domain images, thieves will be dealt with)

"It is now a worldwide story."

It is totally humbling and almost beyond my ability to write here just what impact these images have had. Some people admit to crying with laughter, other to crying with shock as they stare into the face of a close ancestor they never realised existed, and so uncannily like us humans. And then they discover these creatures are hunted and in need of some publicity. I have been inundated with wellwishers, as well as requests to appear on TV stations across the world, and a whole host of interviews for magazines and the press.

But my original intention was never for fame, but purely to get these endangered creatures a bit more publicity and maybe a bit of much needed earnings as well. I knew it would be funny, and that was one other motive for sending out the pictures, that had until then been unoticed by the world. It took me by complete surprise. But I stuck to my philosophy and it was tough going under the pressure believe me. I still have not been on any TV show, purely in order to keep the limelight on the monkeys rather than myself, as I knew the press and media would simply keep the story on myself and my experience. It's not what I wanted.

In fact, when my agent first persuaded me to publish, both I and they (Caters News Agency) thought it would NOT get in more than 3 or 4 UK papers. I have to give much credit to Caters News at knowing how to get the photos in the press and knowing a good story. I am a mere individual, who I have to admit, was unaware that this would be a loved story. Indeed, I have had many encounters with cheeky monkeys before, some attempting to steal my camera, others trying to steal my car! (only kidding - but I once had a baboon in the drivers seat, hands on the steering wheel, after I left the window open in the Masaii Mara)

Here's a few comments to be found on forums or reader's comments: "Possibly my favoutite thing ever", Chloe, West Yorkshire, "I think I have dated him", Katie Price, Essex (and no, she hasn't dated the photographer - yet! No more phone calls please!) Ha ha ha absolutely love these pictures, so funny!! it's hard to imagine them as wild animals", Priness Consuela Bananahammock, "Dead ringer for Milliband", ER, London, Awesomely done man!!! Awesome!! Jason Ferguson, Canada "Is anyone else seriously creeped out by those monkeys?", Sarah, USA "The monkey's photoshop skills are equally impressive", Fertile Egg, USA "This is how Planet of the Apes truly began", Anonymous Coward "After reading about all the doom and gloom this made my day. Brilliant :))" MrMuffin

I can only dream now that these little balls of fluff and joy will get more recognition and hopefully help than had been occuring before my pictures hit the news stands. I intend in due course to contact the scientists and Indonesian department that run the national park in that isolated corner of Sulawesi to offer what help I can to those monkeys. 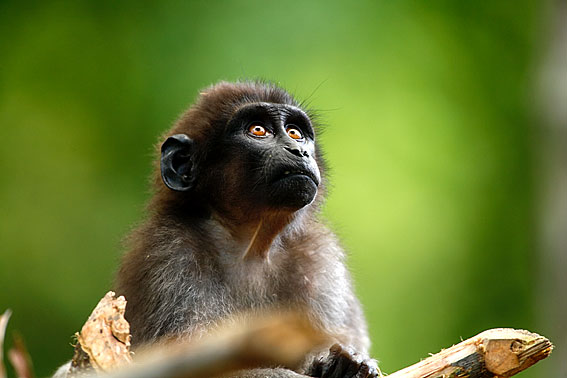 Buton Island lies at the extreme south-eastern tip of Sulawesi. Here is found a variant of the common Booted macaque of the Sulawesi mainland, often taken to be a subspecies. 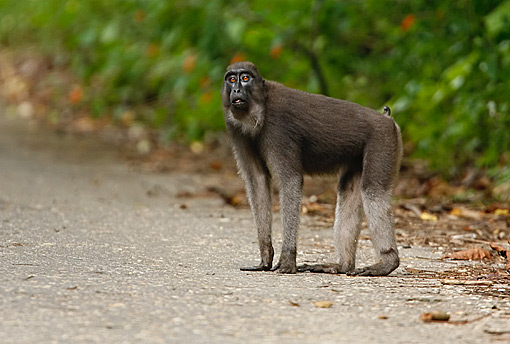 Here we can see the distinguishing pale "boots" of the macaque. These macaques live in rainforest habitat, with home ranges of only a square kilometre or two. Group sizes are quite small at around 20 individuals, but where these monkeys are exploiting farm crops within villages, their numbers swell to double this or more. 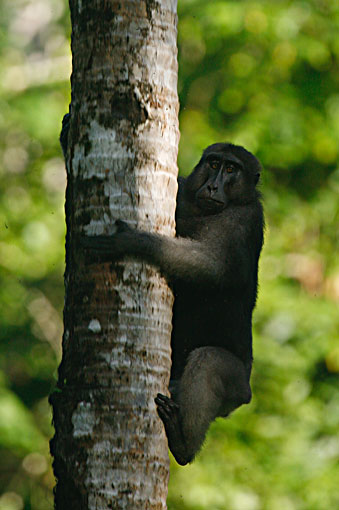 Here, a mature male is attempting to steal coconuts.... 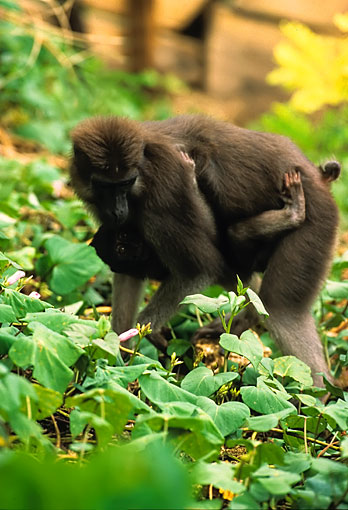 Sulawesi, and indeed all tropical rainforest requires from the photographer some super-human affort to record what they witness. Diplomacy and asking local (western) scientists for help is all part of the process, and believe me, this is often more difficult than the physical demands on the body. I often look at the photos and say, hey that looks easy! But anyone who as ever been to the tropical rainforests of Asia and elsewhere with a camera will know exactly what I am trying to say. Monkey photography especially requires dedication and patience in the extreme. It's tough, even for an experienced mountaineer like myself, used to harsh environments and danger. Give it a go if you think I am talking silly!